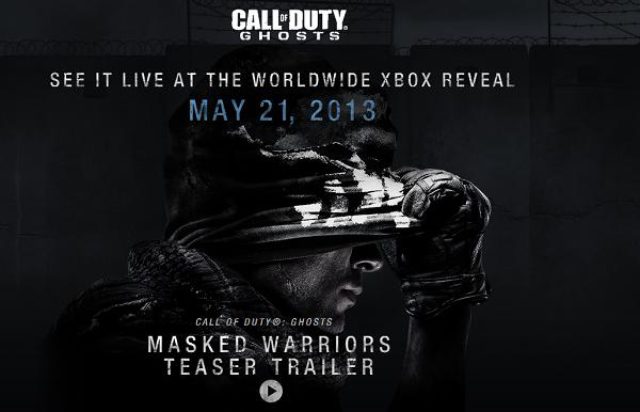 Activision confirmed that next game in their billion-dollar shooter franchise, is titled Call of Duty: Ghosts. The Game will arrive on PC, PlayStation 3 and Xbox 360 on November 5, dates for next-generation platforms and Wii U version are not currently confirmed. This year’s Call of Duty is developed by Infinity Ward’s, same folks that created Call of Duty 4: Modern Warfare. We definitely hope to hear more about Call of Duty: Ghosts at Microsoft’s big next-gen console unveiling on May 21st. See the first official teaser video below and Press Release for more information. COD lover can Pre-order now from Amazon  for $59.99.

[wpspoiler name=”Press Release” ]
ACTIVISION ANNOUNCES THE NEXT GENERATION OF CALL OF DUTY® WITH CALL OF DUTY®: GHOSTS
Call of Duty: Ghosts will set a new Benchmark for the Next Generation
All-New World, Story, Characters and Experience, All Powered by New, Next Gen
Call of Duty Engine from the Developer that started it all, Infinity Ward
For an Exclusive First Look at the Game, Tune in to Xbox: The New Generation Revealed, May 21 at 10AM PDT on Xbox.com, Xbox Live or SPIKE TV
Groundbreaking Title Lands on November 5
Santa Monica, CA – May 1, 2013 – Prepare for the next generation of Call of Duty®. The franchise that has defined a generation of gaming is set to raise the bar once again with the all-new Call of Duty®: Ghosts. Published by Activision Publishing, Inc., a wholly owned subsidiary of Activision Blizzard (Nasdaq: ATVI), and developed by Infinity Ward, the studio that created the original Call of Duty and the seminal Call of Duty®: Modern Warfare® series, Call of Duty: Ghosts ushers in the next generation of the franchise. The new title delivers a riveting all-new gameplay experience built on an entirely new story, setting and cast of characters, all powered by a new, next generation Call of Duty engine that redefines the series for the next generation.
“Infinity Ward set the gold standard for first-person action for a generation, and they’re going to do it again with Call of Duty: Ghosts,” said Eric Hirshberg, CEO of Activision Publishing, Inc. “Ghosts delivers an all-new story, all-new characters, an all-new Call of Duty world, all powered by a next generation Call of Duty engine, which is a leap forward for the franchise. Infinity Ward is going all-in to create the next generation of Call of Duty worthy of the world’s greatest fans.””Everyone was expecting us to make Modern Warfare 4, which would have been the safe thing to do. But we’re not resting on our laurels,” said Mark Rubin, executive producer of developer Infinity Ward. “We saw the console transition as the perfect opportunity to start a new chapter for Call of Duty. So we’re building a new sub-brand, a new engine, and a lot of new ideas and experiences for our players. We can’t wait to share them with our community.”To see an exclusive first look at Call of Duty: Ghosts tune in to Xbox: the Next Generation Revealed on May 21 at 10AM PDT on Xbox.com, Xbox LIVE or SPIKE TV for the debut of the all-new game from Infinity Ward.