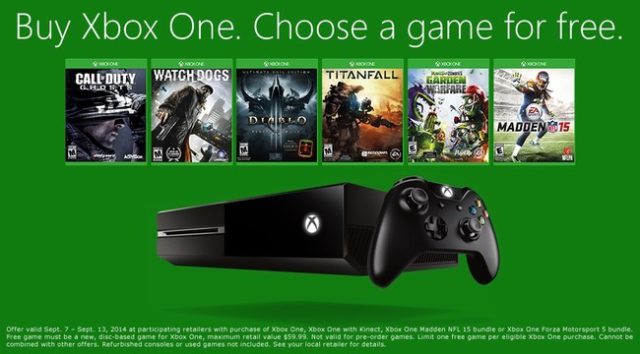 Microsoft would do anything to sell more Xbox One as long as they put their next-gen gaming and entertainment console in your living room. With Xbox One lagging behind in the next-gen console wars, Microsoft’s new Xbox One game promotion wants to help you save some bucks on any regularly-priced game and give it to you free. The new promotion was announced today by Microsoft, customers can choose a game for free when they buy an Xbox One from a participating retailer. The promotion is only available for U.S. customers who buy an Xbox One between September 7th and 13th. You can Mircosoft is running this promotion to have you look the other way when Bungie’s Destiny PlayStation 4 title come out on September 9th. For those who’ve been waiting for games that cost some pretty bucks like Watch Dogs, Titanfall, Madden NFL 15 and Diablo III: Ultimate Evil Edition before the buys an Xbox One, make sure to keep an on this promotion.