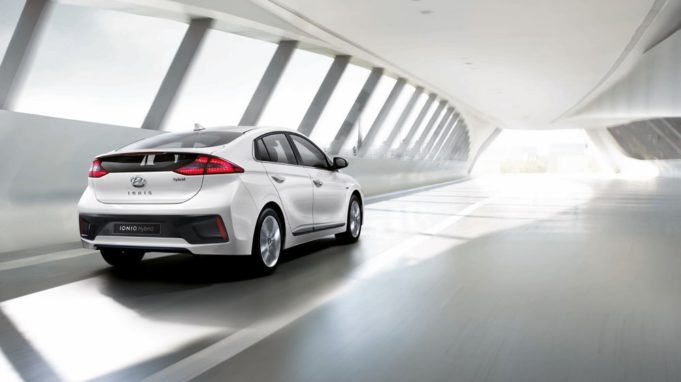 Hyundai is often known for taking bold, yet risky moves and having it pay off in return. With the recent introduction of the new Hyundai Ioniq all-electric vehicle, many suspected that it was only just a rumor, considering that there were no official images of the car or detailed specs, that is until now.

Hyundai just released a few high-res images that detail the car’s exterior and interior. The Ioniq is a sedan that comes with 3 different drivetrain options for your choosing – the gasoline-hybrid, a plug-in or a fully-electric version. Even though we don’t get a good look at the front of the vehicle from these images, the elongated rear-end does give off a “hatchback” vibe that is similar to the Toyota Prius (which may bring more competition in the hatchback vehicle class).

The first Hyundai Ioniq vehicle to be released will be the Hybrid version. It features a 1.6-liter Kappa GDi engine and a hybrid-exclusive dual-clutch transmission. No word on any dates as of yet. Hyundai is also very proud to admit that they won’t share any more specifics of the Ioniq until the Geneva Motor Show in March.

The introduction of IONIQ is a significant milestone for the Hyundai brand in Europe, and another leap forward in our sustainability initiatives, alongside our fuel cell leadership. IONIQ provides a modern mobility experience that fits with the changing lifestyles of customers in the digitalised world. Our unique family of three innovative powertrains and the connectivity package bring new benefits to European customers, further demonstrating our commitment to sustainable and convenient technologiesJochen Sengpiehl, VP of Marketing at Hyundai Motor Europe
Hyundai IONIQ All-Electric Vehicle
1 of 5
Advertisement