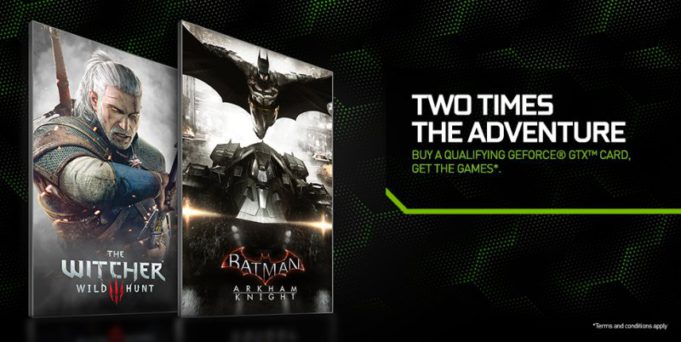 NVIDIA is handing out a great deal when you purchase their GeForce GTX 970 or GTX 980 graphics cards. If you decide to buy one of these graphics cards you’ll receive Batman: Arkham Knight and The Witcher 3: Wild Hunt.

Batman: Arkham Knight is a very beautiful game, the graphics packs so much next-gen technology that it’s not going to be released on the Xbox 360 or the Playstation 3. But to no surprise PC gamers can proudly look forward to such awesomeness. Rocksteady is even adding more extra special effects that won’t even be available on the Xbox One or Playstation 4.

This is in addition to integrating the latest and greatest versions of our PhysX Destruction, PhysX Clothing and PhysX Turbulence technologies, which work in tandem to create impressive effects that react realistically to external forces. In previous Batman: Arkham games, these technologies created immersive fog and ice effects, realistic destructible scenery, and game-enhancing cloth effects that added to the atmosphere and spectacle. Expect to see similar effects in Arkham Knight, along with new features and effects that we’ll be talking about in-depth as we approach Arkham Knight’s June 23rd release.

You can pick up your own NVIDIA graphics card on Amazon or NVIDIA’s webpage, and don’t forget your Batman: Arkham Knights game (and The Witcher 3: Wild Hunt).