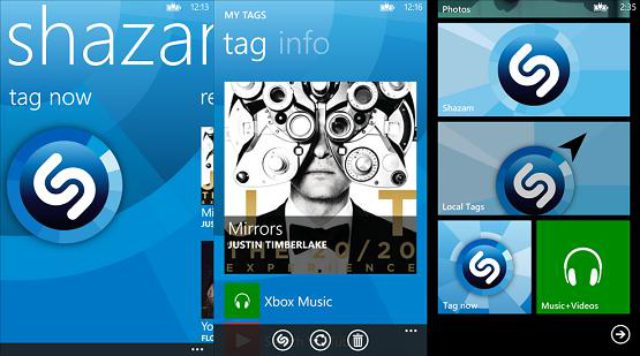 Shazam, the music recognizing app announced today, the launch of their app for Windows Phone 8. The app is free, comes with free unlimited tagging from the home screen, ability to pin your recent searches. The Shazam app for Windows Phone 8 allows the user to identify songs, and even provides the user with lyrics, Shazam lets you purchase your favorite tracks from either XBox Music or, if using a Nokia phone, Nokia Music. The company also stated in a recent press release that, Also, with Win Phone 8, TV fans can use the Shazam App to get a great interactive second–screen experience with the TV shows and ads that interest them.” You can grab the app now from the Windows Phone Store, and act like you’ve known the lyrics to your favorite songs all these years.

[wpspoiler name=”Press Release” ]Shazam Launches Windows Phone 8 App with Links to XBox Music, Faster Tagging and More London – 30 May 2013 – Shazam®, the world’s leading media engagement company, today announces the launch of the Shazam App for Windows Phone 8, with an innovative user interface and features including the industry’s fastest tagging, local tags and tagging from the home screen. The Shazam App is free with unlimited tags and helps consumers discover new music by identifying any song in mere seconds, then enabling them to go on and purchase their favorite tracks from either XBox Music or, if using a Nokia phone, Nokia Music. Also, with Win Phone 8, TV fans can use the Shazam App to get a great interactive second–screen experience with the TV shows and ads that interest them. The app also provides convenient social features with Facebook and Twitter. “We are incredibly excited about this launch as it brings so many of Shazam’s key features to Windows Phone 8 fans,” said Daniel Danker, Chief Product Officer for Shazam. “Windows Phone 8 users now have access to a great smartphone experience, from faster tagging and a new interactive map, where users can discover the music people are listening to around them. This is more than just the music that’s already popular; these are often songs people are discovering for the first time.” The new Shazam App for Windows Phone 8 will include popular Shazam features such as unlimited tagging, so that Windows Phone users can tag all the music, TV shows and ads they like, as well as: · Local tags – Shazamers can check out the current tagging activity in their location, updated every 30 minutes, using the interactive mapping feature. This feature can also be set as a tile on the home screen. · Social sharing – Shazam users can share their finds with friends over Facebook and Twitter · Lyrics – With one touch, fans can see the lyrics to the songs they tagged. · Music reviews and bios – people can get more information about the albums and artists they tag. · Music Links – Now, it’s easier than ever for people to buy the songs they like with links to XBox Music and, if they are using a Nokia phone, Nokia Music hubs. · Lock Screen background – Music fans can set their favorite cover art or tag charts as their phone’s wallpaper. · Tag from the home screen – When Shazamers pin the tagging button to their home screen, they have faster access to discover, buy and share the media that interests them. Additionally, the launch of Shazam on Windows Phone 8 features the great new look and feel of the Shazam App. The new Shazam design also includes larger artwork for tags and a richer blue background. Downloading Shazam onto your Windows Phone 8 desktop, laptop or tablet is easy. The Microsoft Windows Store is built into every platform, making downloading the app a simple transaction.[/wpspoiler]