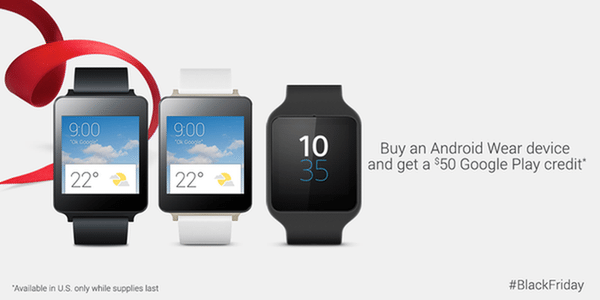 It looks like Google has also joined in the Black Friday deals bandwagon by offering a special deal on Android Wear smartwatches purchased from its Play Store. The Mountain View based company is offering $50 Google Play Store credit on all Android wear smartwatch purchases. The store credit can be used to buy apps, games, movies, music and books from the Play store. The deal started yesterday and will continue until Monday. Google isn’t offering any cash discounts on Android Wear products, except on the LG G Watch. The LG G Watch is being sold at $99 on the Play Store currently, which is $130 less than its list price of $229.

Other Android Wear products that are currently being sold on the Play store are the LG G Watch R, Sony SmartWatch 3, Moto 360, Samsung Gear Live, and the Asus ZenWatch, The Moto 360, Samsung Gear Live and LG G Watch charging accessories are also available but the $50 credit deal is not applicable on those. Extended holiday returns are available on all smartwatch purchases. Most of the products listed are readily available and will be sent out to customers within 1 or 2 business days maximum.

Google is quite serious about Android Wear and reiterated its commitment to the platform a few weeks back by sharing its future update plans regarding Android Wear that will aim at making Android Wear smartwatches more independent devices that would be able to perform many tasks that smartphones do, eliminating the requirement to be connected to a smartphone via Bluetooth to be functional. The first such update was pushed out recently while the major update with a lot more changes will be rolled out early next year.

Unfortunately the Google Black Friday deal is limited to the smartwatches and no deal is available on the Nexus 6 smartphone or the Nexus 9 tablet. Both devices are being sold at their usual price and no freebies are available either.