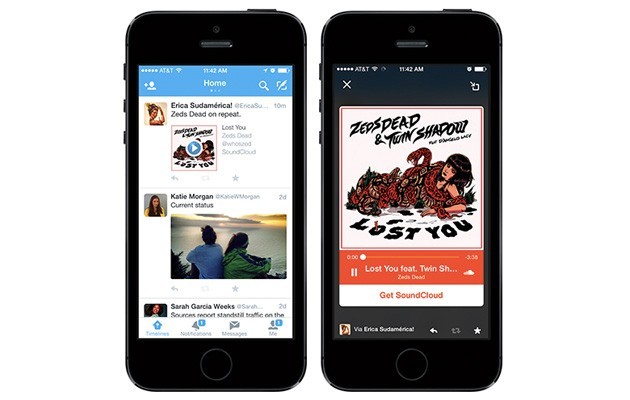 Twitter Cards for apps, products, and photo galleries was unveiled sometime in April. Today the app gained an interesting feature for both the Android and iOS version. The Twitter Audio Card for iOS and Android devices, brings a new way for listening to music directly from your Twitter line.

With a single tap, the Twitter Audio Card lets you discover and listen to audio directly in your timeline on both iOS and Android devices. Throughout your listening experience, you can dock the Audio Card and keep listening as you continue to browse inside the Twitter app. We’re launching this new audio card in partnership with third-party streaming services. The first partner for streaming on Twitter is SoundCloud.Twitter

You can also listen to your favorite podcasts on your timeline from the likes of CashCash, NASA, NPR, Pitchfork and many more. Twitter stated in a recent blog post that, the Audio Card is still in its testing phase, with plans to add more partners and creators. You can check out the Twitter Audio Card feature, see the embedded Twitter post from @DavidGuetta for his exclusive remix , and the rising Chicago rap star @ChanceTheRapper new single. Note, the Twitter Audio Card will stop playing on your mobile device as soon as your screen locks up.

HOT !!! Here is the @robin_schulz remix of #Dangerous !!! I really love it. Click below to listen to the track 😉 https://t.co/nSxejse9Rc

My new sounds: Chance The Rapper & The Social Experiment – No Better Blues http://t.co/PXuZTxHwYJ on #SoundCloud