Quentin Tarantino is one of those cinema purist directors that apply classic movie production techniques to the modern film. With the upcoming release of his newest film “The Hateful Eight”, Quentin Tarantino wants to take the viewers back to the old-school cinema days (remember the drive-thru movies?). He will be capturing The Hateful Eight only with an antique and well used 70mm projector, and it will showcase the film as a gorgeous roadshow release, with intermissions built right in the film. Even though everything today has been digitized, Tarantino wants movie fans and critics to appreciate the glory that only Ultra Panavision can offer.

What Quentin Tarantino did is amazing.” “He built up this infrastructure which is going to open up the floodgates for potential use.”Dan Sasaki, Panavision VP
[graphiq id=”X35uXouHSR” title=”The Hateful Eight (2015)” width=”600″ height=”600″ url=”https://w.graphiq.com/w/X35uXouHSR” link=”http://movies.prettyfamous.com/l/26006/The-Hateful-Eight-2015″ link_text=”The Hateful Eight (2015) | PrettyFamous”]
Advertisement 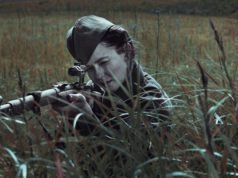