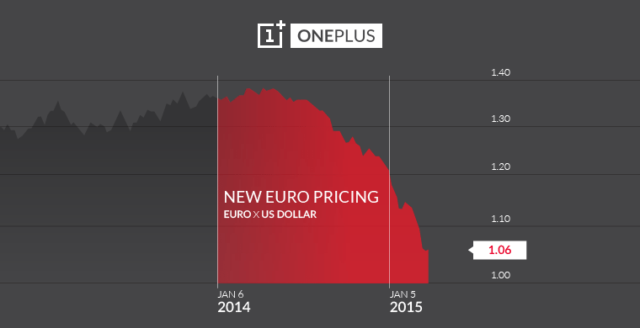 Lately the Euro value has decreased rather rapidly, and so have the price tag for most smartphones. OnePlus has announced that it is going to increase their price of the OnePlus One smartphone on March 25 for all EU countries.

According to OnePlus, the Euro is becoming unstable and they are taking recognizable losses on their end.

“Unfortunately, as the value of the euro continued to drop, our razor-thin margins began to turn into 0 margins. Due to the current value of the euro, we are now selling devices at a loss in the EU. In light of these exchange rate shifts and trends, we will be making some changes to our pricing structure for the One in markets that use the euro as currency.”

OnePlus has also stated that accessories are not affected and will continue to be available at the present rates.