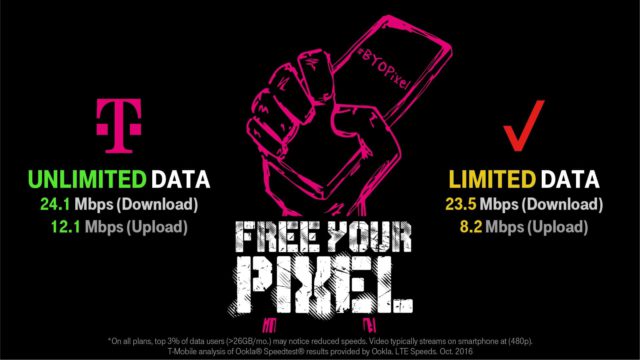 T-Mobile doesn’t like the fact that Verizon is the only carrier to offer Google’s Pixel phones directly. Well, if you can’t beat them or join them, just offer them a deal. That’s exactly what T-Mobile doing, the carrier is attracting Google Pixel owners with a deal to refund $325 towards their bill. The deal is equivalent to getting 50 percent the cost of the base model 32GB Pixel device which is priced at $650 or a sizeable amount towards the $769 Pixel XL. Now the question is, how do you get the unlocked Google Pixel device T-Mobile wants you to jump ship with. You’ll have to buy out the unlocked Pixel device from Google first.

To be eligible for the deal, you’ll also need to sign up for T-Mobile’s new unlimited One plan and show a proof of purchase. As for how your refund would be distributed, T-Mobile noted that the funds would be paid out in $13.55 increments across your bill for 24 months.

To take advantage of this limited time offer, purchase an unlocked Pixel from Google or anywhere else, sign up for T-Mobile ONE, then just show us your proof of purchase via our validation site. You’ll automatically see a $13.55 credit to your monthly bill for 24 months (for a grand total of $325, or half the cost of a 32GB Pixel).T-Mobile

T-Mobile’s new unlimited One plan starts at $70 a month with “unlimited” data, text and talk, but you’ll have to get used to paying extra if you want to tether your device at LTE speeds or watch HD videos.