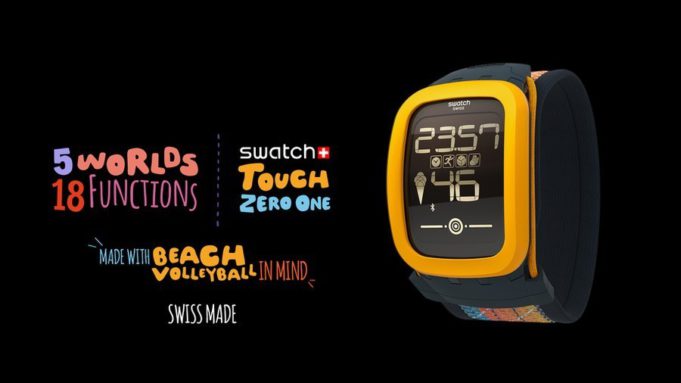 Swiss smartwatch maker, Swatch had mentioned before that it would be unleashing a smartwatch soon. The Swatch Touch Zero One is their first attempt, made for beach volleyball players, this won’t be direct rival to the Apple Watch but as an activity tracker, it may hold its own.

The Swatch Touch Zero One has a curved touchscreen display with built-in backlight and a finger type and swipe control method. The watch comes with Beach Volleyball functions in mind which means it won’t be of much use with other sports.

The Beach Volleyball functions on this smartwatch allow you to count steps, count hits and it has a mechanism to measure the total number of hits performed. It also recognizes different kind of hits during the game whether it is high fives, attack hits, low hits and high hits. The power hit counter also rates the power of a hit from 0 to 100 and is able to you into different ranks starting from amateur to professional.

The amount of sensors and smartphone connections via NFC are limited but you can also use the Touch Zero One app (for iOS and Android) for your data info.

Swatch Touch Zero One
1 of 5

So far, we have no word on whether it will give notifications like other smartwatches (like calls, emails, text messages & alarms), but until then you can see it as a fitness tracker until further identified. The Swatch Touch Zero One is powered by Swatch’s battery lasting technology. The battery life should last for a full month before needing to be replaced. No word on whether a charger will come with the device or whether it is rechargeable.