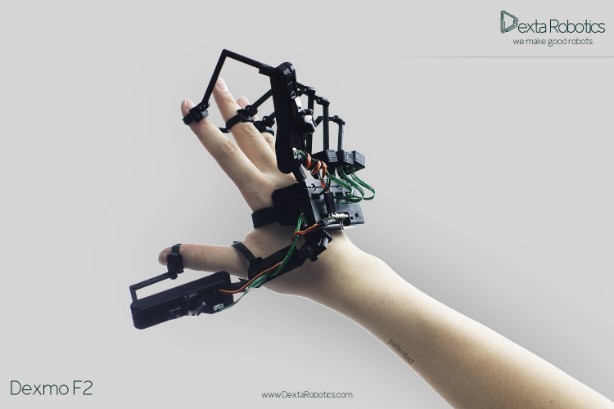 Virtual reality has come to stay, we see new devices get churned out almost every month or existing ones evolve with extra features. A Chinese company Dexta Robotics, just introduced an interesting and affordable exoskeleton hardware ‘Dexmo‘, available in classic and F2 variants.

Dexmo Classic captures 11 degrees of freedom for you hand motion. Three degrees of freedom of motion for the thumb, and both the split and bending of the rest four fingers. These data along with the forward and inverse kinematics algorithms built in SDK can provide developers an accurate hand model skeleton, especially for the thumb part. It can input your detailed hand gesture in to VR instantly

Dexmo F2 has all the functionality that Dexmo Classic does, but on top of that it provides you with digital force feedback(on and off only). On the thumb and the index finger exoskeleton there are two additional piece of hardware that we invested a lot of time developing, called the force feedback unit, which is essentially a miniaturized gear disk braking system. When the avatar you are controlling hits a digital object, a signal is sent back via our SDK to Dexmo F2 and the small actuators actuates, brakes the joint and locks the exoskeleton.

The Dexmo hardware from Dexta Robotics allows you to “feel” objects within virtual reality with its servo-based system providing the user with haptic feedback for digital sensation. The Dexmo exoskeleton is compatible with virtual reality systems like the Oculus Rift or can serve as a robot controller to control mechanical arms and hands. The company also note other practical uses of the hardware such as, using a robotic arm to diffuse and dispose bombs, control remote-controlled cars, smart lighting and list goes on. The best part of this news is, you can get ones of these for less than $200, the company is trying to raise $200,000 via Kickstarter this October to fund the exoskeleton’s production. As long as they reach their goal, the company promises, by May 2015, we’ll be able to get our hands on for as low as $65. Check out the demo videos below if you need a little more convincing before you chip in some bucks.